Atomic Scope helps in getting an end to end visibility of integration solutions built using Azure Integration services such as Logic Apps, Azure Functions, APIM etc. In this article we will walk you through a sample Purchase Order processing scenario implimented using Logic App and Azure function.

The modern integration solutions will be implimented using a service bus architecture or a micro services architecture or a mix and match of both concepts. In our scenario a company called MIUG has a business process called MIUG.SalesProcess. A sales process can have multiple business transactions. However for the bravity we are going to focus on PurchaseOrder business transaction.

The transaction flow is as below.

As we can see from the picture above, the purchase order sent from a customer goes through three key stages of processing . These stages are OrderValidation, Transform and SendToERP. We will be using Atomic Scope components in these stages.

In his section we will walk you through creating business process, transaction, stages and tracking necessary data.

Click on Add Transaction, name the transaction as PurchaseOrder 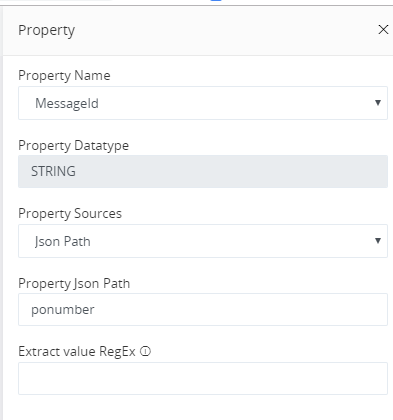 The first stage in the transaction processing is OrderValidation. We will have to use Atomic Scope connectors to log the activitis.

Note: The Atomic Samples which are installed , already have these connectors configured correctly. In this section we will talk about significance of the configuration.

The start activity and update activity connectors will be used at the begining and end of the validation logic inside the logic app as shown below. 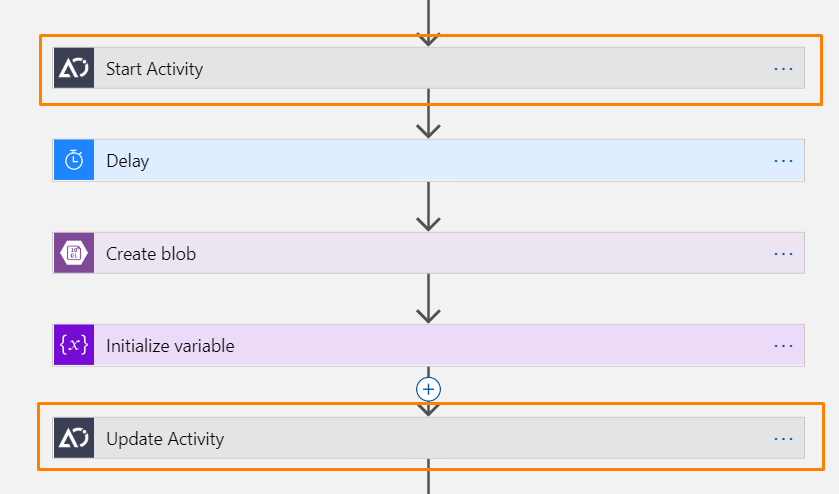 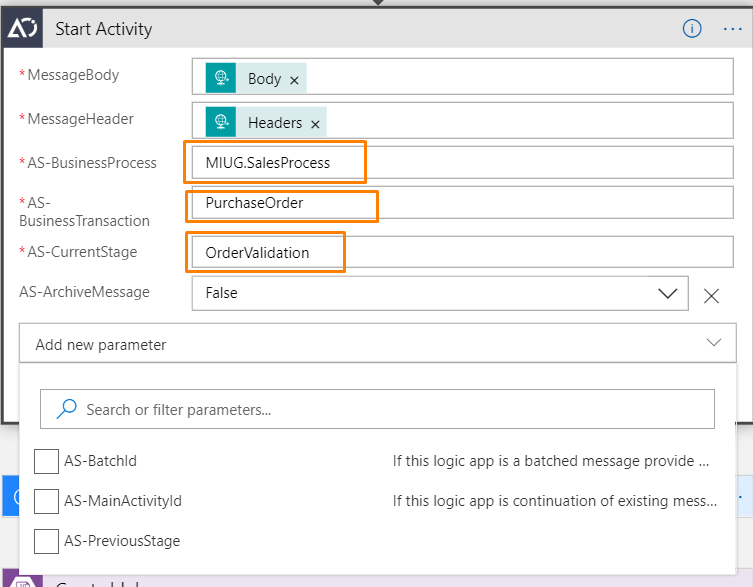 The update Activity connector is responsible for updating the status of the transaction. Apart from this it also collects all the configured Global and tracked proeprties based on stage configuration. 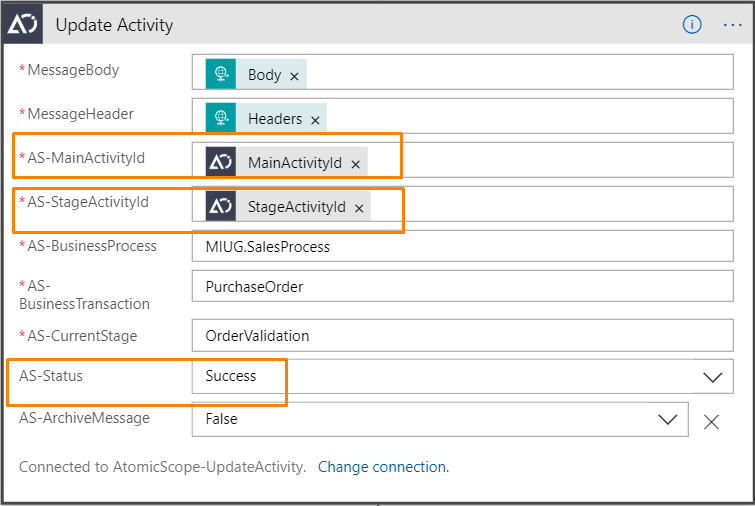 The MiainActivityId and StageActivityId will be the values returned from the StartActivity connector. Once the update activity is executed, it indicates the completion of the stage and the Status flag decides if it was successful or not. In this scenario the flow is successful.

The start activity azure function is used to create a new stage in the transaction processing. The function takes ActivityContent as an input . The activity content object can be created as below.

The StartActivity can be invoked as below.

StartActivity call returns MainActivityId and StageActivityId . This needs to be used in UpdateActivity request header as below.

The UpdateActivity Azure function can be invoked as below.

Similar to OrderValidation logic app, RoutingFlowLogicApp will be instrumented with Start and update activity connectors as below. 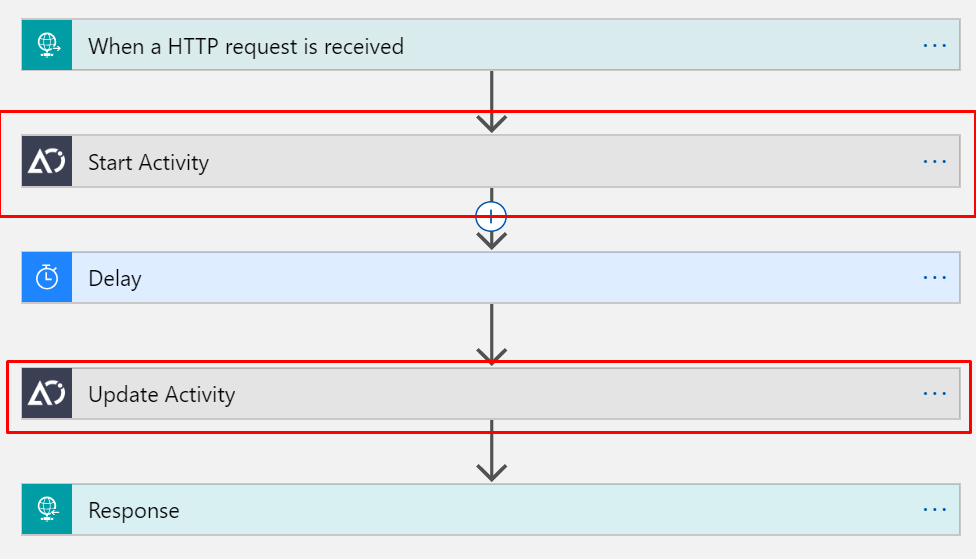 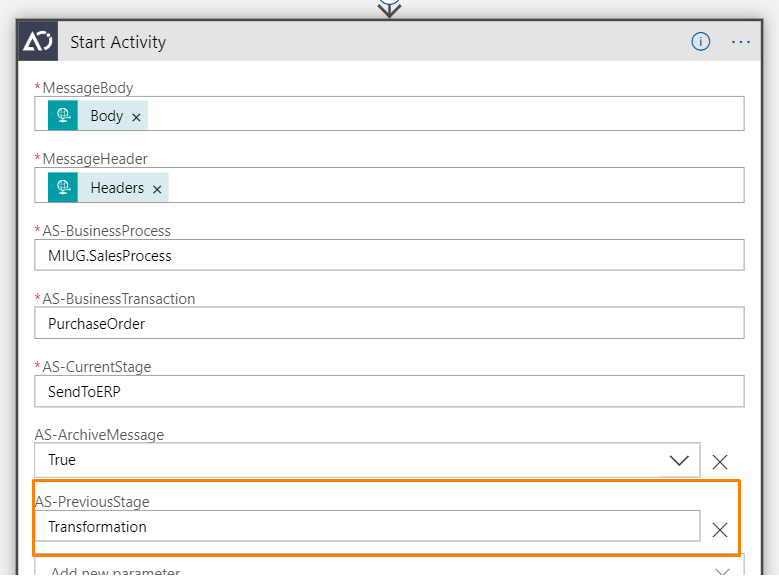 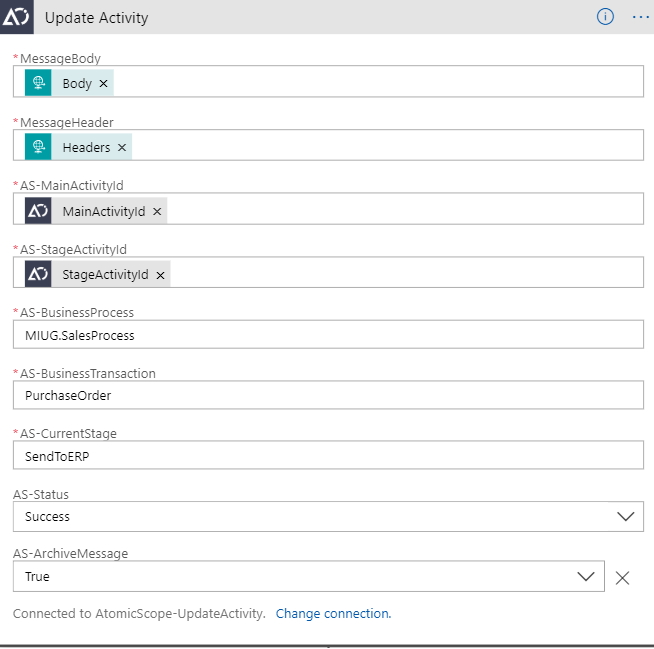 Note: Please use application/json as content type while posting the message.

When the message is posted you will be able to see an activity in Atomic Scope portal as below.

In this section you learned how to use AtomicScope in Azure services such as Logic Apps and Azure functions in a cloud only scenario.

Was this article helpful?
Thank you for your feedback! Our team will get back to you
How can we improve this article?
Your feedback
Comment
Comment (Optional)
Character limit : 500
Please enter your comment
Email (Optional)
Email